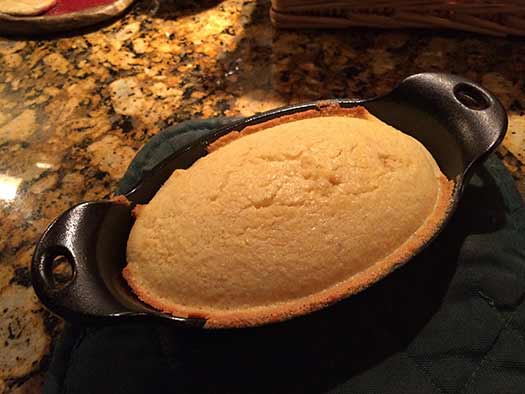 I have never owned a cast iron anything in my life. Okay, that might not be entirely true. I may have owned a skillet once, but I never knew what to do with it and it may have gotten rusty and I may have put it away and never used it again. But to be honest, I’m not really sure if that story is even true.

But. Now we have the internet, and the internet knows everything. I researched how to take care of a cast iron something, and I ordered a single-serving baby one online. It is so freakin’ cute. I also sifted through tons of cornbread recipes until I found one that looked 1. Good (it used buttermilk), and 2. Easy (it didn’t use very many ingredients). I’ve since started experimenting with swapping ingredients, and honey works just as well as sugar. Also, I only bake as much as the server can hold at a time and keep the rest in the refrigerator until I’m ready for it, which is pretty much the next day.

And this is the result. Isn’t she beautiful? If only because she was created by someone who never really learned how to cook and thinks time is better spent creating something that will last a little longer than a 24-hour cycle. But still.

I think she’s adorable. I could just eat her up. (And already have, several times over.)